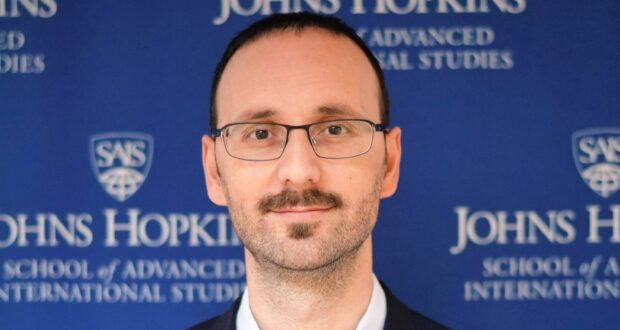 As one of the largest countries of the Balkans, Serbia’s troubled past also poses big dilemmas for the future. Serbia has a history of exporting regional instability. It started four wars in Slovenia, Croatia, Bosnia-Herzegovina, and Kosovo during the last several decades. Although the country has changed since this time, the Serbian leadership still has not. Despite its many problems with its neighbors, Serbia is pursuing avenues to build close ties with many non-Western powers like Russia, China, and the Gulf states. A leading candidate for EU membership, Serbia is the only state in the Western Balkans that has no aspiration to join NATO, but instead chooses to pursue “military neutrality.” Its latest political and military cooperation with Russia and China appears to be an effort to build strategic neutrality with “Serbian characteristics.” But at what cost?

The Russian Federation, as a permanent member of the UN Security Council, symbolizes the “big brother” for Serbs, with whom Serbia has political, historical, economic and religious ties. The Russian veto in the UN has helped Belgrade in many diplomatic issues, especially in blocking neighboring states from granting Kosovo membership in international organizations and preventing the adoption of the Srebrenica genocide resolution. For Moscow, Serbia represents its “extended hand” in the Balkans, including the Serbian minorities in Bosnia and Herzegovina, Kosovo, and Montenegro, where the pro-Russian approach is also visible. Indeed, due to its special relationship with Moscow, Serbia is the only country with EU aspirations that did not join U.S. and EU sanctions against Russia in 2014. It has never criticized Moscow for the annexation of Crimea nor for launching a war in eastern Ukraine. Moreover, Serbia was the only Balkan country with EU aspirations to back Moscow in a December 2019 vote on a UN General Assembly resolution urging Russia to withdraw its military forces from Crimea and end its occupation of Ukraine’s territory.

According to several international media reports, since 2012 when the Serbian Progressive Party, led by Serbian President Aleksandar Vucic, took power, this began the era of Serbia’s democratic deterioration.[i] Also since that time, the Serbian-Russian military ties have progressively expanded. In this regard, U.S. concerns were detailed and published in a report by the Department of Defense in May 2019. Not surprisingly, after the signing of a defense cooperation agreement between Belgrade and Moscow in 2013, Serbia entered into a 15-year security cooperation agreement with Russia. As a result, the military relationship has increased, including the first-ever military exercise between them becoming military donations from the Kremlin and the purchasing of many military weapons by the Russian military, like MiG-29s, Mi-35 attack helicopters, and battle tanks. In response to Western critics on buying weapons from Moscow, President Vucic, a former ultranationalist, ironically stated that “Serbia will no longer be an easy target,” and the aim of buying these weapons was to strengthen regional peace.[ii]

In addition, under the “Russian-Serbian Humanitarian Centre” in southern Serbia – near the airport in the city in Nish, less than 150 km from the U.S. military base “Bondsteel” in the Republic of Kosovo – Russia has built an “intelligence hub.”[iii] Furthermore, Nikolai Patrushev, Putin’s man for the Balkans and head of Russia’s Security Council, has created direct ties with President Vucic.[iv] Russia’s destructive influence is exacerbating regional instability through propaganda and cyber-attacks against European and Euro-Atlantic integration, like previous actions for preventing Montenegro’s and North Macedonia’s accession to NATO. The spread of Russian disinformation and propaganda is supported by its media outlets operating in Serbia, like Sputnik, RT, and Russia 24. These outlets have a big impact in the manipulation of Serbian public opinion with their anti-Western, anti-U.S., and anti-NATO approach, and promote a pan-Slavic, and pan-Orthodox stance. Cultivating far-right nationalist groups and conservative Orthodox ties enabled Moscow to put its hand directly in the Serbian society and use them as a political instrument for the purpose of an anti-Western ideology.

After 2008, Russia has built a monopoly over Serbia’s energy sector. Therefore, after the signing of the TurkStream pipeline agreement in January 2020, Serbia will increase its dependency on Russia more than ever before. In October 2019, Serbia signed a free trade agreement with the Russian-led Eurasian Economic Union (EAEU), becoming the only country with an EU perspective to do so.[v] Belgrade ignored warnings from Washington and Brussels that such deals are not compatible with EU membership. Instead of harmonizing its foreign policy with the EU’s market, which has 500 million consumers, Belgrade chose to join the EAEU, with a much smaller population of about 182 million.

Since Vucic took power – first as a Prime Minister and later as President – he met Russian President Putin sixteen times, and Putin has visited Belgrade four times. Putin has always received a warm welcome in Serbia, such as a military parade by the Serbian Armed Forces and a village in southern Serbia, which was renamed to Putinovo. Jimmy Carter was the last U.S. President to visit Belgrade in June 1980. President Ford had visited in 1975 and President Nixon in 1970.

Former U.S. Deputy Assistant Secretary for European and Eurasian Affairs Hoyt Yee, during his visit to Belgrade in 2017, said to President Vucic that Serbia “cannot sit on two chairs at the same time, especially if they are far apart.”[vi] Serbia, in fact, is not sitting in a Russian and a Western chair, he is sitting on three chairs. In 2009, former Serbian President Boris Tadic signed an agreement on a “strategic partnership” with his Chinese counterpart, Hu Jintao, in Beijing, whose aim was to build a coalition against Kosovo’s declaration of independence. Since then, China has become one of the main pillars of Serbian foreign policy.

As one of the largest countries of the 16+1 platform, Serbia received around a $10 billion in investments by Chinese companies from 2012-2019.[vii] These were not foreign direct investments, but rather loans by Chinese state-owned banks. Chinese companies have become increasingly economically engaged in Serbia by building roads, railroads and power plants. Serbia became the first European country to join China’s Silk Road Fund (SRF) and is also a member of the Asian Infrastructure Investment Bank (AIIB), both of which are seen as rivals to U.S. influence at the World Bank and International Monetary Fund (IMF). In several cases, these Chinese projects are not in conformity with EU standards of sustainability and accessibility to media. In many implemented projects in Serbia, China’s investments have been accompanied by Chinese loans, contractors, workers, and materials – everything is “made in China.”

In order to strengthen bilateral relationships, Vucic has taken care to establish a “National Council for the Coordination of Cooperation with Russia and China”[viii] and appointed his predecessor Nikolic, a hardline, anti-Western politician, to lead that Council. Nikolic was president of Serbia when the Chinese President, Xi Jingping, visited Serbia in 2016. Xi is expected to visit Serbia again this year. This was confirmed by Vucic himself in his message spoken in Chinese for the New Year 2020.[ix] After 2016, Vucic met Xi four more times in Beijing. The prime ministers of these two countries met fifteen times during the period 2013-2019.

Serbia was not only the first European country that bought Chinese armed drones, but also one of the first countries in Europe that has a visa-free regime with China and Russia.[x] Since 2019, Chinese police officers are patrolling with Serbian police officers in the streets of Belgrade and Serbian soldiers are taking part in military exercises with their Chinese counterparts. In addition, for the first time in European history, the Serbian Government has recognized the Chinese as a minority in Serbia.

China’s growing power is also visible at a cultural level, not just by establishing two Confucius Institutes, but also with the construction of the $53 million Chinese Cultural Center in Belgrade, which will be one of the biggest in Europe.[xi] With strong support from the Chinese embassy in Belgrade, Beijing is also creating a united front with Serbian political parties and politicians, business sector, youth, intellectuals and NGOs.

China’s increasing influence in Serbia is also expanding through Huawei, which after the signing of a strategic cooperation agreement with the Serbian Ministry of Internal Affairs will develop the 5G network in Serbia.[xii] Despite concerns raised by Washington, Belgrade did not reconsider its options and was adamant in its decision. Indeed, Serbia was the only member of 16+1 platform that has voted against Western countries at the UN General Assembly’s human rights committee meeting or at the United Nations Human Rights Council, which criticized China’s mass detention of ethnic Uighurs in Xinjiang.[xiii] Serbia also supports China’s position in the South China Sea issue and is against democratic protests in Hong Kong.

The outbreak of COVID-19 expanded China’s influence in Serbia. When in March last year Serbia received a shipment of medical aid by China at the Belgrade airport, Vucic thanked President Xi and China’s Communist Party.[xiv] Vucic kissed the Chinese flag, yet has never publicly kissed the European flag, despite the fact that the EU remains Serbia’s largest and most important trading partner, investor, and donor. Vucic called European solidarity “a fairy tale” and emphasized that only China was willing to offer Serbia a helping hand. The billboards on the streets of Belgrade, dedicated to President Xi, saying “Thanks brother Xi, you are the only one to help us,” are emblematic of Vucic’s view of his closest partners.

Moreover, in the time of pandemic, China and Russia are moving onto a new stage of engagement in the Balkans and have definitely added to the complexity of Serbian democratic consolidation. This could have negative consequences for the region. This is not a side effect of the spread of the coronavirus, but as a result of the fact that President Vucic has two authoritarian brothers in Beijing and Moscow who are promoting their authoritarian model.[xv]

One Day The Sun Will Not Rise in the East

From these elements it clearly seems likely to conclude that instead of Serbia’s “strategic neutrality,” its dependency will remain an additional challenge for the West, and moving more into Russia and China’s orbit will definitely be a risk for Belgrade. The roots of Serbia’s stronger cooperation with non-Western powers are found in its past, and in many ways Serbia seems to still be a hostage of its history. The sooner Serbia deals with its past, the better it will be for its future. But to continue such politics, Belgrade should be led by politicians who have the courage, belief, and trust in Western values, including taking ownership of excuses for its crimes in the past and for the tragedies of ethnic cleansing in Croatia, Bosnia and Herzegovina, and Kosovo, such tragedies all of which had been carried out by the Serb strongman, Slobodan Milosevic and company. This could be a good start from disassociating from its past and also from autocratic regimes like Russia and China with which no country in the Balkans could have a European future.

Faruk Ajeti is a Research Fellow at the Austrian Institute for International Politics (oiip) in Vienna and a member of the Wilson Center’s Working Group on the Western Balkans. Ajeti was an Austrian Marshall Plan Foundation visiting scholar at the Foreign Policy Institute, School of Advanced International Studies, Johns Hopkins University in Washington DC.