By SELIM IBRAIMI- Bulgaria, as a member of NATO and the European Union (EU), following the Good Neighbor Agreement  https://mfa.gov.mk/en/document/1712  with Northern Macedonia ( August, 2017), has sent a Memorandum to the EU regarding the Macedonian language and identity.

Official Sofia has great reservations regarding the review of the joint Macedonian-Bulgarian history where high figures of Bulgarian history and culture and language have also been historical figures in Northern Macedonia since 1945.  The High Commission between the two countries has halted work and the Bulgarian side has accused official Skopje of obstruction.

The memorandum is a new blow to the government of Prime Minister Zoran Zaev and Ali Ahmeti, where new diplomat Bujar Osmani is working to reduce tensions over a possible blockade of Sofia. He said in a news conference that Northern Macedonia has red lines and that the national interest is paramount.

From another point of view, for the EU, a new crisis in Southern Europe between the two countries would be a new headache in the face of the Turkish-Greek crisis.  However, Northern Macedonia must renounce provocative figures and elements towards Bulgaria. 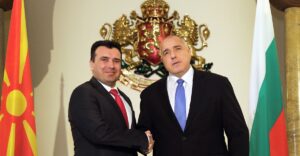 If a historical fact has been distorted by Macedonian historians since XX century, now is the time to correct all the dates and elements that provoke and make the Macedonian side as an instigator of conflicts. Bulgaria, too, must move forward without seeing itself as the protector of Slavic culture and history in the Balkans. Another blockade from Sofia will be detrimental to Skopje and efforts to re-establish its statehood and history.(@CSSDMacedonia)

Selim Ibraimi is an Albanian-American international politics analyst and researcher on Balkan affairs. He graduated in Journalism (BA). He holds a master’s degree in International Relations (MA) from Webster University, Scott Air Force Base in the United States. He lives and works in the United States and N. Macedonia. He is the Director of the Institute for Security Studies and Development – Macedonia (ISSD). Ibraimi is the author of several books and publications on the Balkans. “The Cold Peace” (10 years of geopolitical reconfigurations in the Balkans) -2016. “The Territory of Silent War” (New Trends and Dynamics in Southeast Europe) -2018. -The Decisive Battle (The Plague of the border changes in the Balkans) -2019
2020-09-21
+Admin
Previous: Serbia shkel Marrëveshjen e Uashingtonit, DFC hap zyrën e investimeve financiare të SHBA në Beograd
Next: Një bllokadë tjetër nga Sofja do të dekurajojë Shkupin në përpjekjet për të ‘rivendosur’ shtetësinë dhe historinë e saj