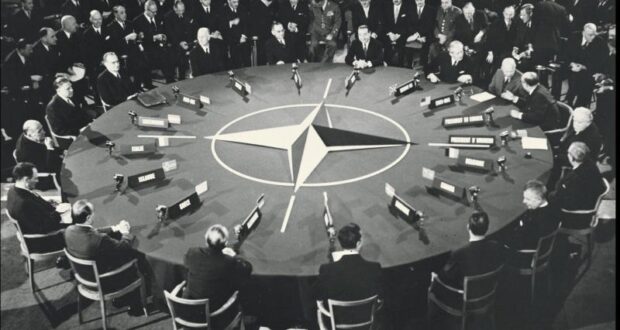 73 years with NATO! Collective security from Western Europe to North America. Not only that, NATO after 1991 expanded with members from the Warsaw Bloc and the Western Balkans. Northern Macedonia is the 30th member of the alliance. Below for CSSD readers and the public, we are bringing material published in 2020 on www.portalb.MK by journalist Selim Ibraimi.

After discussing NATO’s Article 5 in the last topic, let us now look at the structure of the alliance. The NATO headquarters are located in Evere, Brussels, Belgium, while the headquarters of the Command Operations is in the city of Mons, Belgium.

NATO’s civilian structure includes the North Atlantic Council (NAC), which is the body with effective governing authority and decision-making powers in NATO, composed of representatives or permanent representatives by the member states at a higher level (ministers of foreign affairs or defense, or heads of state or government). The Council meets at least once a week and makes major decisions regarding NATO policies. Meetings of the North Atlantic Council are led by the Secretary-General where taken decisions are based on unanimity and mutual agreement between the member states.

The military structure of the alliance includes the Military Committee (MC) which is the NATO body composed of the Heads(Chiefs) of Defense of the member states (CHOD) and is giving advice to the North Atlantic Council (NAC) on military policy and strategy. The Chiefs of Defense of the member countries are regularly represented in the Military Committee by their permanent military representatives. The Council of the Military Committee also meets at a higher level, with Chiefs of the Defense. The Military Committee is led by its chairman, who directs NATO military operations. In the 2008 year, the NATO Military Committee had expelled France due to the earlier French government’s decision of the 1966 year, to remove France from the NATO Military Command Structure, which later was reunited in the 1995 year. By reuniting in NATO, at first, was not represented on the Defense Planning Committee, and this led to disagreements between Paris and NATO members. The Command (ACO) is NATO’s command responsible for operations worldwide. Rapid Corps include the Eurocorps, 1. German-Dutch Corps, Northeastern Multinational Troops, and, Italian Rapid Corps as well as the Naval Altitude (HRF), all of which report on Command Operations allies.

A new NATO science and technology organization (S&T), was established before entering in July 2012, consisting of the chief, a program office for S&T, the NATO’s Underwater Research Center (NURC).

The NATO Parliamentary Assembly is a body that sets broad strategic goals for NATO, and they are meeting in two sessions within a year. The NATO Assembly interacts directly with the parliamentary structures, of the national governments of the member countries that appoint permanent members or ambassadors to NATO. The NATO Parliamentary Assembly is composed of lawmakers from alliance member countries as well as thirteen associate members. Is known as a formally separated structure from NATO and, aims to bring together representatives of NATO countries to discuss security policies at the NATO Council.

The Partnership for Peace (PP) was established in 1994 which aims to enable participants to develop an individual relationship with NATO, to choose their priority for cooperation. The activities offered under the program (PP) are affecting every area of NATO.

Since 2011, all activities and exercises are in principle open to NATO partners, who come from the Euro-Atlantic region, the Mediterranean Dialogue, the Istanbul Cooperation Initiative, or global partners. According to NATO, there are 20 countries in the Partnership for Peace program.

NATO has a total of 30 members, and North Macedonia is the newest member of the alliance. The budget of NATO includes $ 1 trillion.

All NATO member states should allocate up to two percent of national budgets for defense purposes. NATO’s Secretary-General since 2014 is Jens Stoltenberg, elected for a four-year term. His mission was extended for another term and, he will lead NATO until September 30, 2022.