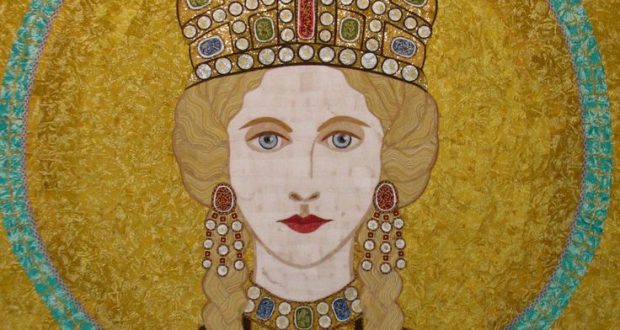 Byzantium and the Silk Trade:

Byzantium was one of the most important western terminals of the Silk Road. Constantinople, the capital, stood at the crossroads of Europe and Asia where many sea and overland trade routes linked the two regions. Its value as a commercial center for the export of silks into Medieval Europe was enormous. At first, the Byzantine Empire’s main article of trade was Chinese silk, which was so scarce that it was coveted by westerners even more than spices or jewels. Even within the empire the wearing of silk was limited; under Justinian’s rule (518-527 CE) court ladies who were entitled to wear silk could do so only if they purchased it in the Crown’s sale rooms situated in the Great Palace.

The introduction of the silk worm into Byzantium, about the time of Justinian, expanded the empire’s domestic silk possibilities. Although Chinese silk continued to be imported, silk worms were raised throughout the empire, with the cocoons transported to Constantinople for spinning and weaving into cloth.

Empress Irene and the Silk Trade (752-803 CE). Called “Irene of Athens” in honor of her birthplace.Given these sensational events, it is no wonder that few have acknowledged Irene’s role in promoting and expanding the silk industry in this western terminus of the Silk Route.

Prepare  for publication by CSSD-Macedonia