Macedonia: US must intervene in growing crisis or suffer the dangerous consequences

Gjovalin Shkurtaj-In her recent book, “The Unraveling: High Hopes and Missed Opportunities in Iraq” (PublicAffairs 2015) Emma Sky, former political adviser to General Ray Odierno the top U.S. military commander in Iraq, quotes Vice President Joe Biden about the Obama administration’s intentions to withdraw from the region. According to Sky, Biden declared, “ Look. I know these people. My grandfather was Irish and hated the British. It’s like in the Balkans. They all grow up hating each other.”

Whether that analogy is true of Iraq or not, Biden was right about one thing: hate runs deep in the Balkans, and the latest news from Macedonia offers more ominous proof.

Some 14 years after the signing of the Ohrid peace deal that signaled a truce between warring Macedonians and the country’s Albanian minority, Macedonia is quickly spiraling into a deep political crisis that could lead to renewed ethnic conflict in the region. The crisis could spread rapidly into the neighboring countries of Serbia, Kosovo, Albania and Bulgaria, with devastating consequences for the entire region. Tens of billion of dollars that were invested to ensure stability and the rule of law in the Balkans, along with countless lives, would then go up in smoke.

The United States could have much more to lose than it stands to gain from continuing its disengagement in the Balkans.

In 2001, the Ohrid agreement ended a sputtering ethnic war with the promise that the Macedonian majority would provide more rights for the Albanian minority, which make up almost one third of the Macedonia’s population of 2 million people. Most of those promises have yet to be implemented.

Despite billions of dollars in aid for economic, good governance and development programs, unemployment in Macedonia remains high, and is even higher among the minority Albanian population. Many Albanians feel forced to leave their ancestral homeland and emigrate in the hope finding a brighter future.

As a result, ethnic extremism is also on the rise. At least 22 people, including eight police, have died in the past few days, and numerous arrests, primarily of ethnic Albanians, have been made. The Macedonian government is claiming to have “wiped out” a group of ethnic Albanian insurgents from neighboring Kosovo.

But the violence could soon spread further. The head of the opposition Social Democratic Party, Zoran Zaev, claims that the latest events were provoked and manipulated by Prime Minister Nikola Gruevski to divert attention away from alleged illicit wire-taping and corruption scandals that have embroiled his government.

This latest crisis again puts to the test the European Union’s leadership and capacity to maintain peace and stability in the Balkans. So far top E.U., NATO and US diplomats are calling for calm and asking the government to fully investigate the latest events that lead to 22 deaths. The results so far are not hopeful.

This reinforces the belief of many people in Macedonia that the United States of America is the only country in the world that can guarantee peace and stability in our region. Yet in the past 6 years, U.S. foreign policy priorities have shifted, and the country’s involvement in the Balkans and former-Soviet republics has diminished.

This has left plenty of room for China and most importantly Russia to play a far more dominant role in the “prosperity” of our region—as we have all witnessed recently in Ukraine.

With a continued bleak economic outlook and a deep dependence on Russian energy supplies, Europe is slowly giving in to Vladimir Putin’s hegemony. Any instability in the region could justify Russian intervention to “defend” its historical ally in the Balkans, Serbia.

The rising winds of nationalism and intolerance could quickly turn into violence. If that happens it could eventually require a costly military involvement by the U.S.

The sensible and cost effective thing to do instead is to become involved now. The United States could have much more to lose than it stands to gain from continuing its disengagement in the Balkans.

The State Department needs to add a few more stops to John Kerry’s extensive globetrotting agenda. The Obama administration needs to make sure he visits our region soon to pressure all sides to tone down their destructive rhetoric.

The Secretary of State would find allies in the governments of Albania and Kosovo both of whom have expressed readiness to help de-escalate the situation. We can only hope that the Macedonian authorities prove willing as well.

But to get to there we need the determination and help of the United States. Let’s hope it comes soon.
Gjovalin Shkurtaj is a member of the National Academy of Science of Albania.(Update)

2015-10-24
+Admin
Previous: Climate Wars and geopolitics of Arctic
Next: Podcast series on CSSD

US Embassy to take a firm stand on the rule of law and corruption in N. Macedonia! 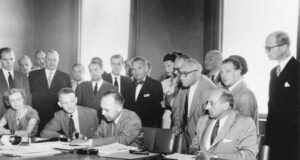 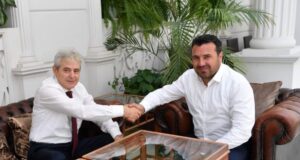