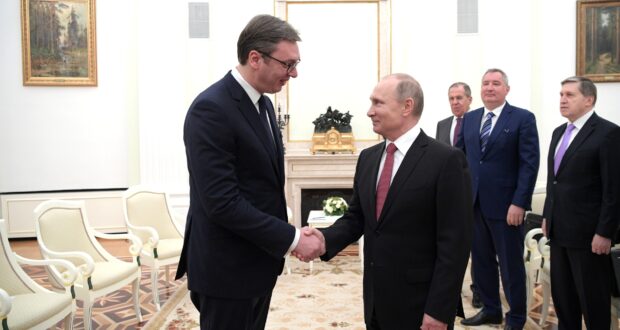 Why Does Putin Care Who Runs a Tiny Balkan Nation?

Ladka Bauerova-Russian leaders, whose conflict with Ukraine has seen them tussling with eastern Europe’s largest country, are now turning their gaze to a Balkan nation with fewer residents than Brooklyn.
There’s a common theme, though: gas pipelines.
Macedonia, a statelet of 2 million people carved from the ruins of Yugoslavia, is struggling with rampant corruption and lingering ethnic tensions.
Premier Nikola Gruevski’s embattled government, embroiled in a wiretapping scandal, supports plans for a Russian gas pipeline to Europe that would provide much needed revenue, and help the Kremlin sideline an existing supply route through its troublesome Ukrainian neighbor.
Russian Foreign Minister Sergei Lavrov this week accused the West of trying to incite an overthrow of the Macedonian government.
“I don’t have any hard-line facts, but it’s a logical suspicion,” Vladimir Chizhov, the Russian ambassador to the EU, said in a Bloomberg TV interview when asked about the claims.
“If you look at the geography of the region, Macedonia is the best place for constructing the extension of the newest energy infrastructure project in the region, the so-called Turkish Stream,” Chizhov said.
Russia’s proposed pipeline would run as an extension of a link between Russia and Turkey. It’s OAO Gazprom’s latest plan to deliver gas to southern and central Europe after the state-run gas exporter abandoned the $45 billion South Stream project in December on opposition from the European Union. Like its ill-fated predecessor, the so-called Turkish Stream is designed to bypass Ukraine, depriving it of vital income from transition fees.
Pipeline Construction
“To help Gazprom reach Central European markets, Russia has advocated the construction of a pipeline that would run from Greece to Macedonia, Serbia and Hungary,” analysts from Texas-based consulting firm Stratfor wrote in a report. “These four countries are at the center of a Russian diplomatic offensive.”
Yet the project faces a mountain of obstacles. Like South Stream, it would have to comply with the EU’s internal market rules that require the Russians to relinquish control over the pipeline at its borders. Even though Macedonia is not an EU member, the pipeline would first have to cross from Turkey to Greece, which is.
“The offshore section of South Stream would have delivered Russian gas to the EU border the very same way as the Turkish Stream pipeline,” said Mikhail Korchemkin, the founder of East European Gas Analysis in Malvern, Pennsylvania. “The only difference is that South Stream was less expensive.”
Greek Offer
Russia says it will no longer insist on owning a stake in the parts crossing the EU. Instead, President Vladimir Putin offered crisis-wracked Greece “hundreds of millions of euros every year” in gas transit fees if it joins the pipeline plan. The pipeline would then continue through Macedonia and Serbia, running toward Italy and Austria.
“For me it’s still a bit too far-fetched to talk about a pipeline that would connect to a project that’s still just on the paper,” said Nikola Dimitrov, a research fellow at the Hague Institute for Global Justice and a former Macedonian ambassador to the Netherlands. “It’s a big question if it’s ever going to happen.”
Still, the Russians seem determined to let their transit contract with Ukraine expire by 2019 in favor of the alternative route under the Black Sea. Gazprom has already laid 472 kilometers (293 miles) of the so-called Southern Corridor, the onshore part of the pipeline in Russia, in anticipation of the deal.
Gun Battle
For Macedonia, any pipeline is a far off solution to the crisis rocking the country now. The opposition has accused Gruevski of abuse of power and the International Monetary Fund has warned that economic growth could be hurt. Meanwhile, a gun battle in the northeastern city of Kumanovo this week left 22 people dead in what the government called a terrorist attack by Albanian insurgents.
“We’re very concerned — the Macedonian events are fairly crudely managed from outside,” Russia’s Lavrov said on Wednesday. “It’s very sad and dangerous that, to undermine Gruevski’s government, the Albanian factor is being applied.”(Bloomberg News)

2015-11-08
+Admin
Previous: Macedonian pipeline could be part of larger project
Next: Macedonia: Fog of Geopolitics