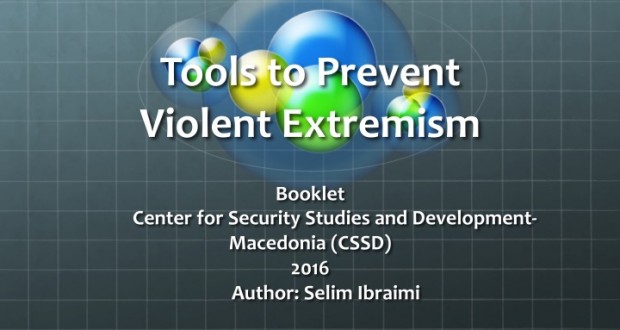 CVE: How to fight the monster?

In the age of globalization and after the terrorist’s attack in American soil, in September 11, 2001, non- state actors have changed the world how we use it to understand it in the 20 century.

Al-Qaeda before and now the Islamic State (IS), are making our lives more difficult with prerogatives of sharing fear and tensions in modern and Western societies.

Even more extremism in fragile states could play an important role on recruiting individual for militias’ or paramilitary forces around the globe.

The Balkans was and, could be target of the radicalized groups who want to take part on this long war.

There is no age for radicalized organizations for being member of the extremists groups. There are many ways to spread propaganda on false religion especially on post war conflicts zones, fragile states, poor income groups and most important in multi ethnic –religious countries.

Primary, this policy paper, will deal with preemptive tools and strategies on how to prevent young people for going into foreign wars from Macedonia and the region.

The booklet may be used for all interested institutions those have as a goal, educating the categories of persons with any background.

Meaning of Extremism and Radicalization

On theory extremism is a tendency to go to the extremes or an instance of going to extremes, especially in political matters, nowadays on religious ideologies. In some cases the matter is referring to individuals who goes beyond the ethics, norms and regulations.

Radicalization is a process, when an individual and group comes to adopt extreme political, social, or religious ideals and aspirations that rejects or undermine the status of the freedom of choice. For example, radicalism can originate from a large social consensus, against progressive and contemporary changes in society.[1]

Radicalization can be both violent and nonviolent, although most academic and professional literature focuses on radicalization into violent extremism (RVE).

In a modern, globalized economy and information technology, radicalization serves as a kind of sociological and political trap that gives individuals space to satisfy their material and spiritual needs.

Please visit also the policy paper (1) on this issue by clicking at:

2017-01-23
+Admin
Previous: Building Community Resilience in CVE
Next: Moscow is attempting to put “one foot” in Macedonia!

Will, there be a rift between BESA and SDSM?