Macedonia a new crisis for EU

By Selim Ibraimi- Founder of Security Studies and Development, Macedonia

The last military and police intervention in the city of Kumanovo have brought the memories of the Balkan Wars. What is going on in Macedonia? Finally by all indicators Macedonia, becomes a flashpoint in the region.
The ethnic and political balance is being tested again in Macedonia. Last political tensions show that Macedonia has unresolved problems. The case is more complicated in Macedonia due to the lack of political will to overcome ethnic issues, which since 1991 same problems brought Macedonia in the edge of ethnic conflict.
So, the last police and military intervention in the city of Kumanovo, show the lack of democratic State. Leaders of political parties after the signing of the declaration on peaceful protests in Macedonia agreed to start talks on the political framework and to prevent another conflict with broader dimensions in the country.
Kumanovo, except the tragedy, conspiracy and loss of lives, contains the collapse of leadership. The resignations of the top intelligence figures of the ruling Macedonian party, will include a series of political actions by all parties, including the Albanian party, the Democratic Union of Integration (DUI).
DUI is the second major political party in the coalition with the ruling party of Prime Minister Nikola Gruevski, (VMRO-DPMNE).
The leader of DUI for some reason has not accepted any responsibility and none of the top politicians of his party has resigned.
This week under supervision of EU and U.S. diplomats, all major political parties have reach an agreement for early election on April 2016. The EU representative, Johan Han said in Skopje that, Macedonia is in transitional phase and all parties must work to keep the agreement alive.
The transitional process based in media reports may take a time, because of the fragile ethnic situation. Transitional government is an option on the table and foreign diplomats could use some carrots for politicians of Macedonia.
The new framework aims to prevent violence after the Kumanovo armed conflict and wiretapping scandal, which opposition, the Social Democrats (SDSM), demands the resignation of Prime minister.
The political process in Brussels and Skopje is under diplomatic mediation of EU and the U.S.
Eventually, the transitional government will have a role of preparing the country for elections if all major parties will agree on new electoral code. The transition process is ahead and, the next debate is to take place after the concrete movements by government partners. The last Statement of U.S. Senator Chris Murphy is a slap, kick, criticism of what leaders, political parties and the Macedonian government, on how they operate. On October 2014, he noted some serious delays in political process and reforms in Macedonia.
Chris Murphy said the U.S. government should re-engage again in Balkans. According to last Statement, the EU and the U.S. must do their work to ensure a realistic way forward for Macedonia. In absence of initiatives, hi said that Macedonia’s progress will continue to deteriorate at the expense of regional stability.
Surely diplomats and local leaders will come with some ideas and options.
In this process even after the parties have agree in some issues, is missing a concrete proposal which, may lead to prolonged political debate in the fragile country.
In 2001 country was very close to a Civil war but, due the successful mediation of U.S. and EU diplomats, on August 2001 was signed the Ohrid Framework.
After that, the lack of stability, ethnic tensions and the dual foreign policy of PM, made the country worst. Macedonia has a long path to EU integration and NATO membership. All parties must work on stability and ethnic balance. Peace must be preserved.

2015-05-28
+Admin
Previous: Exports Imports:Serbia and Bulgaria,national dependency from Russia
Next: Tug of War in Macedonia 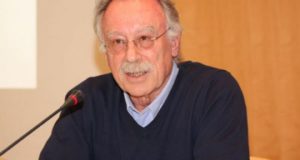