Energy security is a topic of growing concern to many EU countries and the Western Balkans, here defined as Albania, Bosnia and Herzegovina, Croatia, FYR Macedonia, Kosovo, Montenegro and Serbia, could play a role in improving that security through possible investment in liquefied natural gas (LNG) terminals and new gas pipelines.

The Western Balkans themselves may also benefit from alternative routes for gas supplies to Europe from Russia, the Caucasus and even further afield via LNG import terminals. Geographic position, access to the sea and the desire to create stable regulatory policy frameworks are factors that make the Western Balkans an interesting prospect for energy investors.

Most EU countries use gas extensively as a source of energy and the share of gas in total energy consumption is up to 40 per cent in some of them. According to Eurogas, total gas consumption in EU-28 in 2013 was equivalent to 462 billion cubic metres (bcm). Approximately one-half was consumed in Germany (89bcm), Italy (69bcm), Austria (8bcm) and Central, Eastern and South-eastern Europe (65bcm). All of these countries would face extensive short- and medium-term difficulties in case of disruptions of Russian gas supply.

The current geopolitical tensions have heightened these risks because the majority of Russian gas supplies have to transit Ukraine. While one-third of total gas consumed in the EU comes from within the bloc, the rest has to be imported.

The main external sources of supply in 2013 were Russia (27%), Norway (23%) and Algeria (8%). The share of gas from Qatar, the EU’s main LNG supplier, was 4%. The lack of an effective internal market for energy and limited interconnection in some regions make the EU’s energy position vulnerable to exogenous shocks, as it could take significant time for alternative supply options to be realised, especially in Central, Eastern and South-eastern Europe (CESEE).

In the near future the scenario could worsen as domestic production in Europe is forecast to decline by 1.4% p.a in the period 2015-2035. Although European gas demand is growing by just 1% p.a. and has weakened somewhat recently due to poor economic performance, Europe increasingly relies on imported gas, in particular on net imports via pipelines. These pipelines could provide 51% of demand by 2035, up from 37% today. Such an increase could boost Russia’s market share and, as a consequence, put pressure on the EU’s goal of promoting liquid gas trading hubs.

Countries in the Western Balkans face many challenges in developing their energy supplies. Years of under-investment, combined with slow progress in reforms, have held back the region from developing its potential. Corruption and rule of law problems often act as obstacles for a coherent regional energy policy. Nonetheless, the region has increasingly been seen as a potential transit region of gas supplies to the EU, with implications for developing gas infrastructure in the region.

To meet the European demand-supply gap there were three main pipeline projects: Nabucco from the Caspian Sea region, South Stream from Russia and TAP from Azerbaijan. Of these, only TAP is still being developed; Nabucco lacked financing, and recently Russia announced that it will no longer support the South Stream project mainly because the EU has objected to the failure of Russian sponsors to comply with internal market rules.

This leaves TAP, which is designed to bring in around 10 bcma of natural gas from Azerbaijan via the Trans-Anatolian Natural Gas (TANAP) pipeline, Greece and Albania, and across the Adriatic Sea to Italy. The TANAP/TAP pipeline could also be upgraded to almost double capacity with compressor stations. In addition, the construction of the proposed 5 bcm Ionian Adriatic Pipeline (IAP) from Albania, through Montenegro and Bosnia and Herzegovina, to Croatia (the IAP would be linked with the Krk LNG terminal) would have the capacity to add further supply to markets in CESEE.

Nevertheless, the EU could still face a medium-term supply gap. LNG could have a role to play, as incremental volume could arrive from the Middle East and potentially the US when gas export terminals are due to become operational from 2015 onwards. The Western Balkans could exploit potential demand for LNG import capacity through the following projects:

Building an LNG terminal in Croatia: While this has been discussed for many years, recent events in Ukraine have made the Krk LNG Project more realistic than before. The EU sees the project to be in the bloc’s common interest and, as stated by the Energy Commissioner in his recent visit to Croatia, the EC has decided to support it. The proposed facility would have a possible capacity of 15 bcma and as such would provide most of that gas for export as Croatia’s annual consumption is only about 3 bcm. There are already pipeline connections between Croatia and Hungary, and Croatia and Slovenia. Under the Croatian Law on Strategic Investment Projects, which entered into force in November 2013, the government can act quickly and speed up the implementation of the project. However, currently the LNG prices are driven by high growth countries in Asia, and therefore they are up to 30% more expensive than European spot markets meaning that this gas would most likely fulfil a marginal role and may not result in increased gas-fired electricity generation in the region.

Exploiting potential offshore resources: Recent natural resource tenders have taken place in Croatia and Montenegro. Croatia opened the first offshore bidding round in 2014, with bids to be awarded by early 2015. The tender attracted considerable interest, with more than 30 oil and gas companies reportedly present at the launch. Montenegro opened its first offshore bidding round in 2013 with three international oil and gas consortia replying to a tender. Private companies, including Petromanas Energy and Royal Dutch Shell, are currently also exploring oil and gas production in Albania’s offshore zone by performing test drillings. However, the lack of proven reserves means that such resources will only come into play in the longer term.

Opportunities for the EBRD:
Over the next decade there is more to come in this transit area as neighbouring countries are going through major changes. Significant discoveries in the eastern Mediterranean Sea could make Israel and Cyprus new suppliers to the European gas market in the longer term. Russia could decide to provide additional volumes through Turkey instead of Bulgaria. Both of these factors could considerably alter the energy relationship between the Western Balkans and the EU and even the pattern of consumption within the EU. The EBRD will have a key role to play in the transformation by making sure that infrastructure is built that facilitates market integration and secure supplies across the region.

This piece has benefitted from the contributions of Elcin Akcura, Anthony Doherty and Giuseppe Grimaldi in the Office of the Chief Economist and from the Energy Business Group in the Banking department. 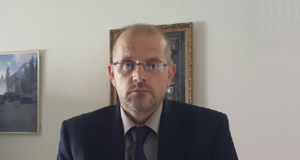