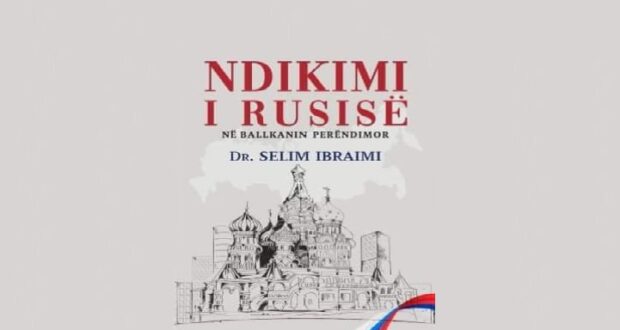 Dr. Selim Ibraimi comes with the newest book “The Influence of Russia in the Western Balkans”, published by @ISSDMacedonia. Book reviewers are Anton Pancev, Ph.D., and Etem Aziri, Ph.D. The book is in the Albanian language.

The study “Russia’s Influence in the Western Balkans” is one of the most important books in the field of geopolitics regarding the Western Balkans region in recent years. The Russian Federation is one of the main actors in this region and aspects of its policy need to be explored from different perspectives. Dr. Selim Ibraimi presents original research that addresses sensitive and crucial topics for the overall development of the Balkans in general because these topics seriously affect other Balkan countries, as well as the Euro-Atlantic community. The author has addressed all aspects of Russian influence in the Balkans, strategies, and instruments of this influence. The presentation of the historical retrospective for the emergence and growth of Russian interest in the Balkans and the various Russian projects for the inclusion of this area in the “Russian sphere” help to understand the current policy of Moscow towards the region. Analysis of Russian propaganda shows “soft power” tools and Russian hybrid operations. Analyzes of the role of energy and armaments in Russia’s strategy for the Balkans are very important. It is with these instruments that Russia extends its influence in the Balkans the most. Other aspects of Russian policy towards the Balkans that make the monograph a complete study have also been examined. The quality of the work is further enhanced by the use of official Russian documents, which define elements of the Russian strategy for the Balkans, as well as by the use of various sources in a critical and comparative way.

Research is based on a broad methodology, which combines quantitative and qualitative methods. Standardized interviews of experts, originating from different historical and geopolitical countries and schools, help not only to build an objective picture of Russian influence in the Balkans by overcoming ideological and national prejudices but also show a very successful research approach. The monographic study reflects the historical objectivity of Russian policy of great importance to the Balkans. Dr. Selim Ibraimi has dedicatedly researched the historical, political, geopolitical, economic, cultural, military events and processes during the last decades, analyzing them carefully and professionally. This has brought genuine scientific results and a serious study has been created with the appropriate content and form in which the necessary scientific tools have been used. The paper has the structure and method of qualitative analysis and the author’s conclusions are based on facts and processes relevant to Russian policy towards the Balkans. The monograph has also entered the core of diplomatic issues and presented Russia’s projects, efforts, and political goals towards the Balkan countries. This shows that Selim Ibraimi has a very good understanding of Russian strategies that allow the author to make credible and valid predictions of Moscow’s policy in the Balkan region. This study should be read carefully by any researcher who has an interest in the processes in the Balkans.

The author of the book entitled “Russia’s influence in the Western Balkans,” by Dr. Selim Ibraimi, has managed to make a very serious and important study for the governments and states of the Western Balkans that aim at a democratic order and integration into NATO and the EU. The author has managed to argue the influence of Russia in this part of the Balkan Peninsula after the fall of communist regimes in these countries. Dr. Selim Ibraimi, who is distinguished as an excellent expert of international relations, through the book offers many convincing arguments that Russia has no plans to give up this part of Europe. On the contrary, according to the author of the book, she (Russia) exercises her influence in a very sophisticated way. The goal of Russian influence, of course, is the relativization of NATO as a political and military force that in recent decades has been fully put in the service of world peace and the non-inclusion of this part of the Balkans in the EU.

Dr. Selim Ibraimi makes serious efforts to clearly identify Russia’s interest and plans for the Western Balkans region, but above all to identify Russia’s methods of action towards achieving goals, be they short-term goals, medium-term goals, or long-term goals. It is no coincidence that he has been determined to analyze Russian influence in the Western Balkans from more angles to convince the public of these countries that Russia’s influence has a historical past, has a present, and will surely have a future. It is no coincidence that the author in the final reviews also gives some assessments of how the countries of the Western Balkans should act to prevent or minimize Russian influence in their countries.

The book “Russia’s Influence in the Western Balkans” is generally divided into two parts, two parts that are strongly related to each other and represent a logical structure. The first part is about the theoretical aspect while the second part is about the empirical aspect. The book is accompanied by a very rich bibliography, mainly of external authors, which affects the increase of the quality of the issues that are addressed, which in itself is interesting and challenging. Dr. Selim Ibraimi, based on preliminary research on this issue, offers an analysis of the development of the Russian state and in parallel with the development of diplomatic activities of this country in the Western Balkans. In this regard, the author discusses the development of the Russian state in the period before and after the October Revolution, offering an analysis of the forms of action of Russian diplomacy in the Western Balkans from the October Revolution to the dissolution of the USSR which then offers and an analysis of the specifics of Russia’s diplomatic action in the period after the fall of the Berlin Wall.