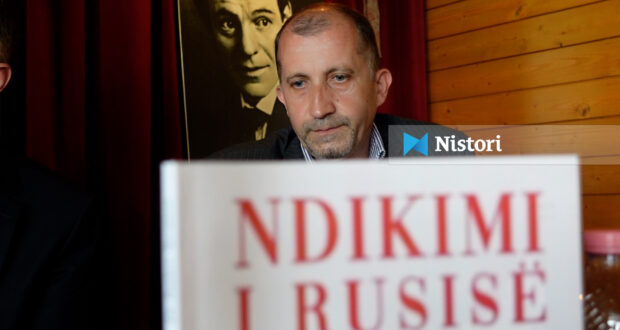 The book of the Albanian-American journalist and analyst, Dr. Selim Ibraimi “Russia’s Influence in the Western Balkans” was promoted on Saturday in Tetovo, N. Macedonia. The publication presents several years of research by the author on the role of Moscow in the Balkans.

“Dr. “Selim Ibraimi makes serious efforts to clearly identify Russian interests and plans for the Western Balkans region, but above all, to identify Russia’s methods of action towards achieving goals, be they short-term goals, medium-term goals, or long-term goals.”. “It is no coincidence that he has been determined to analyze the Russian influence in the Western Balkans from more angles and to convince the public of these countries that Russia’s influence has a historical past, has a present and will surely have a future “, says prof. dr. Etem Aziri in his review. “It is no coincidence that the author in the final reviews also gives some assessments of how the Western Balkan countries should act to prevent or minimize Russian influence in their countries.”

He says that the book, “Russia’s Influence in the Western Balkans” in general, is divided into two parts, two parts that are strongly related to each other and represent a logical whole. The first part is about the theoretical aspect while the second part is about the empirical aspect. The book is accompanied by a rich bibliography, mainly of external authors, which affects the quality of the issues being addressed, which is interesting and challenging.

“According to Etem Aziri, EU countries should show more flexibility for countries that see the future in the large European family, while the governments and political elites of the Western Balkan countries should neither fluctuate in theory nor in practice.” between East and West ”.

“The Russian Federation is one of the main actors in this region and aspects of its policy need to be explored from different perspectives.” According to Panchev, Dr.Selim Ibraimi presents original research that addresses sensitive and crucial topics for the overall development of the Balkans in general, because these topics seriously affect other Balkan countries, as well as the Euro-Atlantic community.

According to Professor Anton Panchev, “the quality of the work is further enhanced by the use of official Russian documents, which define elements of the Russian strategy for the Balkans, as well as by the use of various sources in a critical and comparative way.”

The assessor, Professor Xhelal Zejneli, said that Russia has tried and is currently trying to penetrate the Western Balkans. According to him, the Albanians in the Balkans are targeted by Russia.

“The Russians will not succeed in subjugating the Albanians.” In terms of publication, he said the book has a rich and independent bibliography, keeping in mind academic references. Zejneli furthermore said that “for three hundred years, Russia has been working against the Albanians, emphasizing the Berlin Conference, London and the current state of relations between Kosovo and Serbia. “Russia is pressuring Serbia not to accept any agreement with Pristina and the issue to become a permanently frozen problem.” According to him, the solution is hindered by Putin.

Whereas, according to the other evaluator, the publicist and professor Abdulla Mehmeti, ‘the promotion of the book come at a convenient time in international circumstances’.

“The most forbidden topic to talk about for decades has been the Russian influence on the Albanian world.” According to him, Russian influence is systematic, direct, and sometimes indirect in all forms. He said that the influences have damaged the Albanian issue. Memeti said Ibrahim’s work has a regional geographical limitation and focuses on Russian developments and influence in the Western Balkans over the past 20 years, where he says he has a strong history of Russian influence. Memeti added that very few authors have addressed this problem in the Albanian world. “The author has achieved his goal with this publication,” he said. Russian influence will remain its presence. This is the fourth book of Mr. Ibraimi in the field of geopolitics and hybrid warfare in the Balkans.